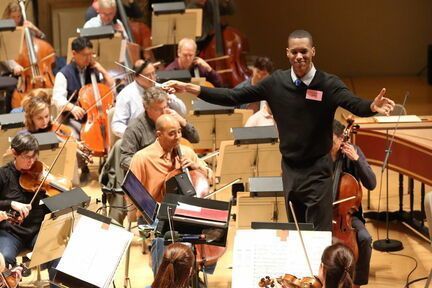 The Denver Young Artists Orchestra is proud to present the very first commission of the Hear the Future: A New Works Initiative: Jherrard M. Hardeman's To Bloom Again, to be premiered by DYAO's String Ensemble under the direction of Maestro Robert Stahly. The Hear the Future: A New Works Initiative is a commissioning project that focuses on traditionally untapped groups like female composers and composers of color. For DYAO's first commission, we chose a bright young conductor and composer who has already accomplished great things at a very young age. Let's learn a bit more about him!

Jherrard Marseille Hardeman is a Conductor and Composer from Detroit, Michigan. Jherrard currently studies Orchestral Conducting with David Robertson at The Juilliard School where Jherrard received a Bruno Walter Memorial Scholarship. Jherrard is also currently serving as Music Director and Conductor of the Detroit Chamber Orchestra as well as Interim/Guest Conductor for Community Music Center of Boston's Chamber Orchestra.

As a conductor, Jherrard has worked with the Chicago Sinfonietta, Juilliard Lab Orchestra, Detroit Chamber Orchestra, Neapolitan Orchestra at the Berklee College of Music and the Longy Conservatory Orchestra. Jherrard also continues to work as a guest conductor for the Detroit Metropolitan Youth Symphony program and has worked as a guest conductor for the Dearborn Youth Symphony. As well, Jherrard has put together 15 orchestras of 21 - 50 musicians and dozens of smaller chamber ensembles under the name Integrated Strings Perfection. In 2018, Jherrard was one of four finalists in the Boston Pops' Bernstein-inspired Conducting Competition. Jherrard studied composition with Dr. Chad Hughes (Morehouse College), Dr. N Lincoln Hanks (Pepperdine University), Malcolm Peyton (New England Conservatory), Dr. Aaron Helgeson and Dr. Paul Brust (Longy School of Music). His compositions have been performed by the Detroit Composers' Project, Hole in the Floor, the Horszowski Trio, the Chicago Sinfonietta, Detroit Chamber Orchestra's All-City Symphony, and the Grosse Pointe Symphony Orchestra. Jherrard has also served as an adjudicator for the Community Music Center of Boston's Annual Lapin Competition and as an orchestra clinician at the inaugural National Heritage Academies East Regional Music Festival.

In his free time, Jherrard enjoys bowling, golf, playing basketball, and has been known to occasionally bake desserts.

Jherrard sat with the String Ensemble and answered some of their questions.  Check it out!