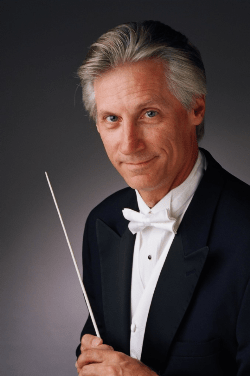 Mr. Kenney is the 2007 Grand Prize Winner of the Varna (Bulgaria) International Conducting Competition. He is now in his 18th season as Music Director of the Fort Collins (Colorado) Symphony and Director of Orchestras at Colorado State University. Named in 2004 to an additional post as Music Director of Opera Fort Collins, he currently conducts three professional operatic productions as well as numerous orchestra concerts and dance performances each season throughout Northern Colorado.

In six seasons as the Virginia Symphony’s Associate Conductor, Mr. Kenney appeared more than 350 times with that orchestra where he was responsible for programming and conducting Pops, Family and Young People’s Concerts. During his tenure with the Virginia Symphony, he was also invited to guest conduct the Williamsburg Symphonia, Virginia Chorale, Norfolk Chamber Consort and Virginia Waterfront International Arts Festival.

Mr. Kenney has also enjoyed success directing opera, ballet and musical theater. Previous positions include Music Director of the Virginia Ballet Theater, Co-Principal Conductor of the Oakland Lyric Opera, and Guest Conductor with Universal Ballet Korea. During the 2014-2015 Season he conducted productions of Follies, Gianni Schicchi, Idomeneo, and Lucia di Lammermoor. In the past ten seasons he has been on the podium for Carmen, Così fan tutte, Amahl and the Night Visitors, Sweeney Todd, Turn of the Screw, Barber of Seville, Madama Butterfly, La cenerentola, Rigoletto, Tosca, Die Zauberflöte, Die Fledermaus, La traviata, Il trovatore, Street Scene, La bohème, Pagliacci, Cavalleria Rusticana, Falstaff, Turandot, Marriage of Figaro, The Merry Widow, Aïda, Don Giovanni, and The Tender Land. In addition he has conducted over one hundred performances of The Nutcracker, Swan Lake, The Firebird, and many other dance works.

Named Educator of the Year by the Colorado Chapter of the American String Teachers Association in 2008, Mr. Kenney enjoys working with talented young people in his position as Director of Orchestras at Colorado State University and has served as Guest Conductor with the Alabama, New Mexico, and Virginia All-State Orchestras. Awarded the prestigious Carmen Dragon Conducting Prize in 1992, Wes Kenney served as Music Director of the Oakland Youth Orchestra for five seasons.

Mr. Kenney is one of the founders of the CSU Summer Masters Degree program for working Music Educators and has helped over 60 professionals earn their MME degrees with an emphasis in conducting. As a conducting teacher he has taught an many workshops including a Conductors Guild workshop at CSU and at the Conductor’s Institute held at Bard College in upstate New York, teaching alongside founder Harold Farberman and American Symphony Orchestra Music Director Leon Botstein.

Mr. Kenney is a past president of the Conductors Guild, a 2000 member service organization to the conducting profession. He currently is on the Guild’s advisory board. He is a graduate of the University of Southern California and San Francisco State University. Additional studies include three years as a fellow at the Conductors Institute, several American Symphony Orchestra League and Conductors Guild Workshops, and the Sandpoint Festival.  His teachers include Harold Farberman, Hans Beer, Gunther Schuller, Hans Swarovsky and Miltiardes Carides.